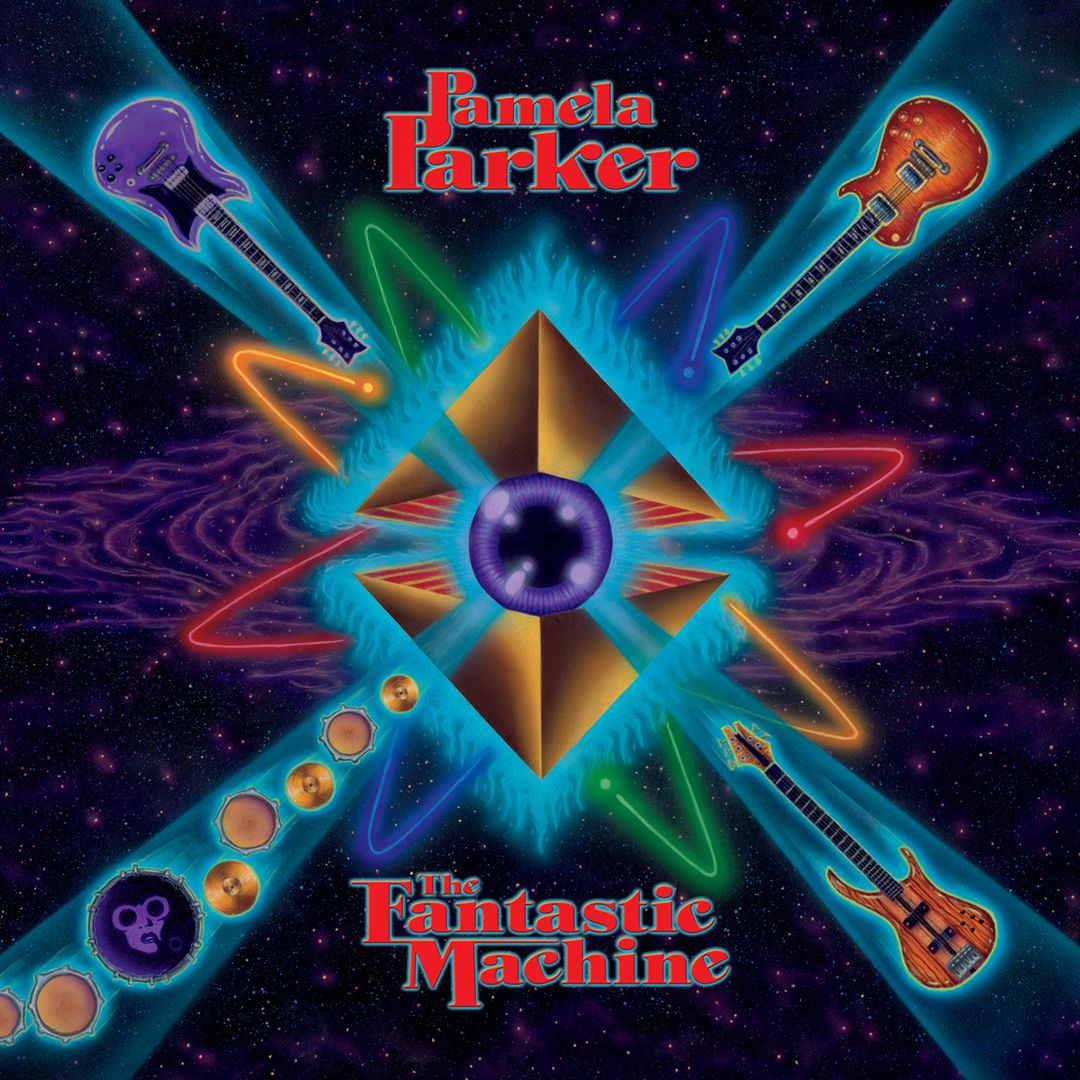 You can also listen to The Fantastic Machine HERE on all digital platforms:  https://onerpm.lnk.to/PamelaParker

The Fantastic Machine the new album is here...

Cover artwork hand painted by our favorite airbrush artist, Michael Moss. The band and I recorded this record at the legendary Hyde Street Studios in San Francisco, CA over the course of the last 3 years.  We now present this album to you in all forms you can imagine online.  Click on the link here:  https://onerpm.lnk.to/PamelaParker

The Fantastic Machine is meant to stand for this creation of life we get to share on a daily basis and how magical it truly is that we are all here.  The Fantastic Machine symbolizes the female and male bodies creating life together.  With all the people on this planet, when we work together, miracles can happen.

Birth on its own is magic and the female body who caries the child is also the "machine" of life creation.  This album is meant to embody the fantastical beauty of nature and the magic of the machine we create when we work together.  We are so proud to present this body of work to you today!!!

If you get a chance, please give us a review on any of your preferred platforms with as many stars as possible.

Dearest Dears:  We are rounding completion on our third studio album at the legendary Hyde Street Studios!!!  We are also headlining the AES SF Bay Area Studio Crawl Afterparty for Hyde Street Studios in upstairs Studio C (legendary room where Santana recorded Abraxas, Herbie Hancock's Headhunters, Grateful Dead's American Beauty, and the list goes on and on with the multiple room building.  Mark your calendars for our band performance in this legendary room for Friday, September 28th at 8PM.  Show will start earlier than regular but go later than expected!  This is how we like to do it.  Healing the world one song at a time!  For more information on the AES Afterparty, join the e-mail list and I'll be emailing details soon to all of our people (that includes you!).  See you in SF's legendary recording studio Hyde Street Studios (upstairs in Studio C) on Friday, September 28th. (245 Hyde St., San Francisco, CA 94102)

Sneakiest Peak From The New Album

'When' and 'Eclipse' were both produced at Hyde Street Studios by Pamela Parker and her band featuring Chris McGrew on drums, Tom Finch on guitar, Ryan Hickey on keys/organ and Spence Murray on bass.   Engineers Nathan Winter, Jack Kertzman, and David Saenz all worked on this project in Studios A and D of this legendary studio. 'When' music video features video producers Dano Perez and Doug Bouziane Jr.

Hoodline.com picked our show for one of their weekly pick previews.  This is what they had to say about why you should come to our show!!!

Pamela Parker is without question one of the monarchs of the San Francisco rock scene.  She is not only an excellent performer, but she truly embodies the larger-than-life persona she's created for herself.  Her wild style, controlled and deliberate guitar playing and powerful voice speak enough to that point, but she has also played with several incredibly talented players in her time.  It's no wonder nearly every gigging musician in the city has heard of Pamela Parker, so check her out for a classic rock-inspired experience that will leave an impression.  - Hoodline.com

Guitar Player Presents 10th Anniversary featured Pamela Parker on guitar playing Led Zeppelin's famous tune "The Ocean" with Gretchen Menn from Zepparella.  They both rocked those solos while Jimmy Leslie rocked the vocals.  Pamela also had the pleasure of singing the Jefferson Airplane tune "White Rabbit" with Jefferson Starship's own Jude Gold.  A good night had by all, Pamela Parker, also played in the band Jimmy Leslie & The Flow, of which she's been a member for a year.  The entire night also featured performances by amazing talent like Eric Barnett, James Nash, Shelley Doty, Derek Brooker, Sean Leahy, Miles Schon, Uriah Dufy Jules Leyhe and more.

Christmas Song Spectacular Crew is featuring Pamela Parker on vocals/guitar/songwriting, Drew Southern on guitar/vocals/songwriting, Paulo Baldi on drums, Tony Glaser on bass, Jordan Feinstein on keys, and Alex Attard on saxaphone.  All tracks recorded live at Studio Circle in San Mateo, CA by Jermaine Hamilton and mixed on the NEVE 8038 in Studio A by Nathan "Winterland" Winter at Hyde Street Studios in San Francisco, CA.  Filmed live at the mixing session on location at Hyde Street Studios.

Oakland First Fridays will feature Pamela Parker with her full band from 7-8PM at the intersection of 25th & Telegraph Ave. This glorious community event is one Oakland throws the first Friday of every month from March to December.

Oakland First Fridays is an immersive art and community experience on the first Friday of each month on Telegraph Avenue from West Grand to 27th Street.

Thousands of people come from across the Bay Area and beyond to see and experience art, be inspired, eat great food, enjoy live music, and stroll through the amazing, eclectic city of Oakland.


Remember Pamela Parker and her full band plays from 7-8PM sharp at the intersection of 25th & Telegraph Ave.

A last minute show addition opening for the historic band New Riders of the Purple Sage in Santa Cruz, CA at Moe's Alley.  Pamela will be performing at 8pm.  NRPS goes on at 9PM.

Singing with TEA LEAF GREEN at The Independent in SF

Last night Pamela Parker sat in with San Francisco's Best of the Bay, TEA LEAF GREEN.  Videos to follow.  Rock N'Roll was had by all.

Evolutionary Process #1 on Charts in Canada!!!

"When I first heard Pamela Parker's Is It Real I knew I had to have Evolutionary Process. Pamela Parker sounds like the love child of Ann Wilson and Axle Rose all the while looking like the daughter of Slash, Eric McFadden plays the guitar like he's being possessed by Jimi Hendrix and Carlos Santana at the same time. There's only one real word to describe this band and this album....Smooth. This is the kind of music you want to roll over, light a cigarette and ask was it good for you, too? There is no such thing as a bad song on this album, it's the kind you can put in your car and go on a road trip on, drive with the top down and looking damn cool doing it. I'm a music director of a radio station and i feel that Pamela Parker's Evolutionary Process is my greatest discovery this year and if you're smart it'll be yours 2 "